Sherry is a fortified wine, which is a wine made with the addition of a spirit (usually grape brandy), like Port, Madeira or Vin Doux Naturel. It is made from white grapes, usually Palomino Fino (a local variety) but it can also be made from Moscatel (Muscat of Alexandria), or Pedro Ximénez. Sherry has the long winded Protected Designations of Origin (PDO) of “Jerez-Xérès-Sherry y Manzanilla de Sanlúcar de Barrameda.”. This must be on each bottle, the solution is a neat logo (to the right). This has to be one of the rare PDOs with its name in three languages (Spanish, French, and English).

Where is it from? 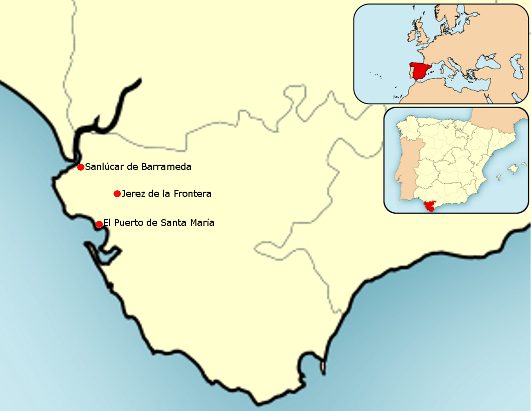 Sherry comes from the region of Andalucía on the tip of Spain; more specifically it comes from within the Sherry triangle, which is formed by the cities of Jerez de la Frontera, El Puerto de Santa María and Sanlúcar de Barrameda.

Whilst the ageing of the wines (explained in more detail below) in these three cities is similar, the difference in micro-climate changes the flavour of the wines completely. The main reason for this is that the Flor yeast that covers the surface of the wine in the barrels, favours a cool, humid climate.

Jerez
This is the largest city in the area and is where the majority of the region’s wines are produced. It is located upon one of many hills which dominate a wide open landscape of albariza soil (a type of white marl). Being the furthest of the three towns from the sea, the temperature is higher and the wines generally have more body than the wines of El Puerto and Sanlúcar.

El Puerto de Santa María
This town is built on the bank of the River Guadalete where it flows into the Bay of Cadiz. This historic town, famous for its fishing port as well as its wine, has diversified into a tourist resort. This is the smallest of the three towns, storing just 5% of all Sherry. The climate here is cooled by the Atlantic winds, and in summer is on average ten degrees centigrade less than the town of Jerez. This helps to preserve the Flor, and create lighter, more elegant wines.

Sanlúcar de Barrameda
Sanlúcar is further north and is on the opposite bank to the Doñana National Park (a protected wetland). The wines here are lighter still, and are often described as having a salty tang. Around 15% of Sherry is stored here and they have their own PDO Manzanilla.

What is Flor?
Flor is a film of naturally occurring local yeasts, they float on top of the wine and feed off a combination of the remaining sugars, dissolved oxygen, alcohol. This skin of yeast protects the wine from oxidation as well as adding another dimension of flavour to the wine. To survive, the Flor needs a relatively cool temperature, as well as a humid atmosphere. This is why the wines of the more humid coastal towns (Sanlucár and El Puerto) have a thicker layer of Flor. The thinner the layer of Flor, the less protection there is from oxidation. This explains the richer style of wine from the warmer town of Jerez. The Flor would die out naturally, but is kept alive by the continual replenishment of the butts with younger wines (replacing the vital nutrients). Flor is a rare phenomenon but not limited to Jerez, as well as the nearby Montilla, and Huelva; Vin Jaune in the Jura (France) and Tojaki (Hungary) also have similar naturally occurring film-forming yeast.

What types of Sherry are there?

Those in green have been aged under Flor, whilst those in red are aged in contact with oxygen.

Fino/Manzanilla
Fino is the lightest and driest style of sherry. This wine is aged in barrels that aren’t completely full to allow the Flor to develop. It is made in all three sherry towns and can be sold as simply Fino, or with a reference to the town it was produced in: Fino de Jerez (around 80% of production); Fino del Puerto – from El Puerto de San María; and Manzanilla from Sanlúcar de Barrameda. As the wines age and the Flor starts to die off they develop more body and can be sold as Fino Amontillado, or the equivalent from Sanlúcar, a Manzanilla Pasada.

Amontillado
An Amontillado sherry is a Fino which has been left to age once all the Flor yeast has died. This means that the wine has aged biologically (under Flor) and then oxidatively. It is this second stage that turns the wine a light brown or amber colour and gives it a more nutty flavour.

Oloroso
Oloroso is a wine that either did not develop Flor or had alcohol added to it in order to stop Flor developing. This wine has been aged in the Solera system, like the Finos and Amontillados, but it hasn’t been protected from the oxygen by a veil of yeast. This style of sherry is richer, nuttier and darker. It is naturally dry however, many are sweetened by the addition of Pedro Ximénez or Moscatel wines. Olorosos are higher in alcohol generally around 18 to 20%.

Palo Cortado
Palo Cortado is the rarest, and my favourite of the different styles of Sherry. It is a half-way house between an Amontillado and an Oloroso. These wines will initially have been fortified to 15% to allow Flor to develop (as with a Fino), however after a few months ageing the wines were found to be more similar in style to an Oloroso. The cask will then be marked with a horizontal line over the original slash mark, and the wine will be fortified to 17% and aged oxidatively. Jancis Robinson describes Palo Cortados as having “the elegance of the Amontillado with the power and body of the Oloroso.”

Pedro Ximénez
Pedro Ximénez or PX for short is made by first leaving the grapes to raisin (and therefore concentrate) in the sun. The grapes will then be pressed, and the juice taken off the skins and fermented. The fermentation is then stopped artificially by adding grape brandy so as to keep a high level of sugar in the wine. Before being aged in a Solera system. PX can either be sold as a single varietal wine, or used to sweeten other styles of Sherry.

Moscatel
Moscatel de Alejandría (Muscat of Alexandria) will be made in exactly the same way as PX. These wines will again either be bottled as Moscatel or used to sweeten other styles of Sherry.

Cream Sherries
This is a blend of traditional style Sherry with sweet wine (either PX and/or Moscatel), this was specifically created for the British market and the most famous brand Harveys Bristol Cream is still the best selling sherry in the UK. There are three styles of Cream Sherry:

Pale Cream, this is usually Fino/Manzanilla with sweet wine added to it.

Medium is usually an Amontillado with the addition of sweet wine.

Cream is usually an Oloroso which has had either PX or Moscatel added to it.

What exactly is the Solera method?
A Solera is a system of fractional blending, the name comes from the barrels closest to the floor (suelo). This system has several advantages: it maintains the quality and style, as well as refreshing the nutrients for the Flor yeast. The way it works is that a fraction of wine is removed from the oldest scale of the solera and bottled. The bottom or solera barrels are then topped up with the younger wines from the next scale known as the first criadera. These are in turn topped up by the scale that is two years younger the second criadera. This goes on until the youngest scale is being replenished with new wine. Amontillado and Oloroso are richer wines and will need fewer scales than Fino/Manzanilla as they vary less from year to year. This process of transferring from one barrel to another is known as running the scales. 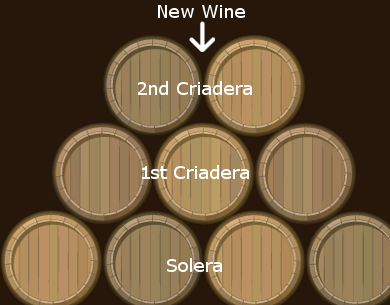 The Bodegas
The sherry bodegas vary in style (ranging from modern concrete warehouses to very old traditional buildings), and in size (from three storey complexes to small halls). They do however, have a few things in common. They usually have very high ceilings, this keeps the cellars cool as the hot air rises away from the barrels. The bodegas will also have been built to face the Poniente (westerly wind blowing in from the Mediterranean). When this cooling breeze blows, the large doors of the bodegas are opened to help increase the circulation of the air. The bodegas put Albero sand (absorbent yellow sand that is also used in bullrings) on the floor, which they irrigate to maintain humidity. Finally the walls of the bodega are usually very thick (around 60cm) which provides good insulation. These walls are whitewashed, which deflects the sun’s rays and further helps to keep the bodegas cool. All of these measures are to try to keep cool and stable conditions within the bodega.

What are sherries of certified age?
There are two designations for very old sherries: V.O.S and V.O.R.S. Sherries judged to be over 20 years old can use V.O.S (Vinum Optimum Signatum) on the label, handily for English speakers V.O.S can also be expressed as Very Old Sherry. Sherries judged to be over 30 years old can use V.O.R.S (Vinum Optimum Rare Signatum) on the label with English speakers using Very Old Rare Sherry in its place. These wines will have gone through the Solera system, and are therefore blends of different vintages, so the producers have to submit samples for chemical analysis and to a Tasting Panel before they are allowed to use the label.

More information
If you would like to find out more about the fascinating subject that is Sherry, there are two brilliant books the first is sadly out of print but available second hand – Sherry by Julian Jeffs